Death in the 18th Century 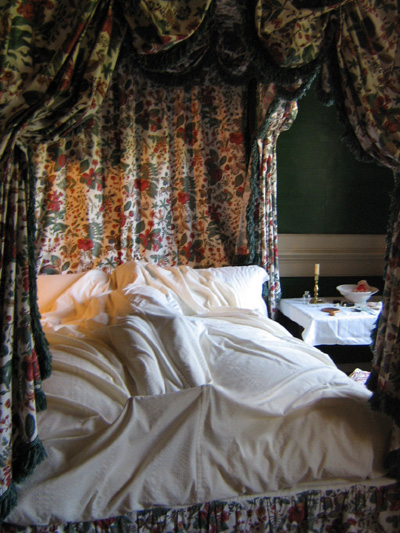 In October the Carlyle House commemorates the anniversary of John Carlyle’s death, which occurred in October some time after 1780. The exact date isn’t known, only the month.

This photo was taken in the bedroom where he died. The room was prepared to look as much like it would have back then, including a faux corpse.

The bowl to the right of the bed was for bloodletting. The best medical practice at the time was to cut the sick person and let the evil spirits flow out of the body by bloodletting, which was done as often as one would take an aspirin today.

The hand mirror on the table next to the bloodletting bowl was to check for signs of life. If you hold a mirror closely to the nose and mouth, condensation will develop on the mirror from the person exhaling. They didn’t know so much about checking for a pulse back then.

This entry was posted on Thursday, October 19th, 2006 at 12:01 am and is filed under Alexandria VA, historic, Old Town, photoblog. You can follow any responses to this entry through the RSS 2.0 feed. Both comments and pings are currently closed.

11 Responses to Death in the 18th Century