Tale of the Female Stranger 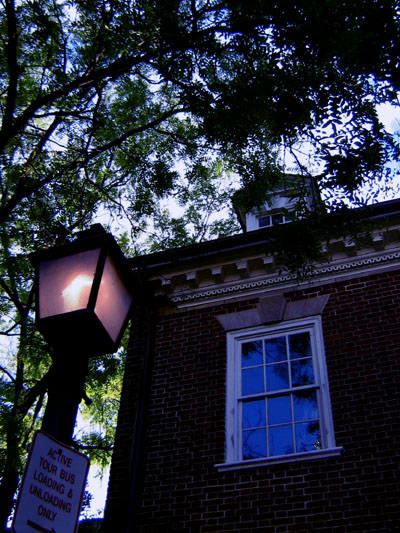 One of several local legends involving hauntings takes place in Gadsby’s Tavern. It is the Tale of the Female Stranger.

As the story goes, late one night in September 1816, a very ill young woman was brought to the tavern by her distraught husband. They brought her upstairs, and a doctor was summoned. She died after several days. The man had an elaborate gravestone made for her and swore everyone at the tavern to secrecy as to both of their identities. The man disappeared shortly thereafter, leaving unpaid bills behind. All hotel records that might have borne his name were erased, and neither of their identities has ever been known. It is speculated that the woman may have been a member of the English royal family.

It has been said that the ghost of the female stranger has been seen at an upstairs window from time to time, holding a candle. Another story says that a man on a tour of the building saw a lit candle in an upstairs room. He went to get the manager and together they entered the room. The candle wick had never been burned, but when the manager touched the glass shade, it burned his hand.

A very good and detailed retelling of the full story can be found here. The author, Michael Pope, writes for one of the local papers.

This entry was posted on Tuesday, October 17th, 2006 at 12:01 am and is filed under Alexandria VA, haunted, historic, Old Town, photoblog. You can follow any responses to this entry through the RSS 2.0 feed. Both comments and pings are currently closed.

8 Responses to Tale of the Female Stranger